The Yak Festival is one of the most important festivals in Mongolia. It’s held in Orkhon Valley Cultural Landscape, in Bat Ulzii village of Ovorkhangai province, July 23rd each year.
The program of the festival focuses yak rodeos, milking trials, beauty contest, polo on yak back, and races. This local celebration attracts a lot of people because it’s entertaining and full of surprises. On the occasion, Mongolian people wear their nicest traditional clothes to attend or take part in the different games and trials.

Yak was domesticated in Tibet about 3000 years ago but introduced in Mongolia during 16th century. Yak, (Bos grunniens), long-haired, short-legged mammal are mainly at elevations of 4,000–6,000 metres (14,000–20,000 feet). Number of population is around 900000.
In Mongolia, the yak plays an important role in supporting local livelihoods and development of a farm. Yaks are used to transport people and cargo, equipment and warm clothes are made with their wool. As well as products are made with meat and milk which contains A vitamin even their dung is used for fuel. While yaks are dependable domesticated animal, they are also surprisingly fast runner, especially in sprints. 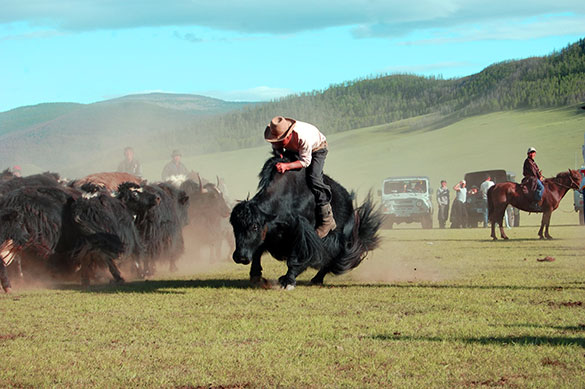 Contact us for your custom-made private trip for experiencing this festival!