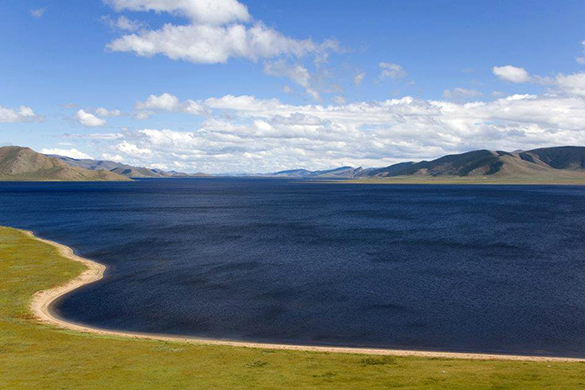 Extinct Horgo volcano is located on the east shore of White lake in the northern part of Hangai mountain ranges at the altitude of 2210 meters above sea level. The volcano erupted 8000 years ago as a last active volcano and its surrounding by lava field and basalt rocks. Volcano eruption resulted a crater with 200m radius and 100 deep. From the summit of this basalt-covered mountain and endangered species of flora and fauna with volcano crater has been protected since 1997.  White lake is formed when an immense mass of hot- lave once blocked the bed of river Terkhi. In the area of 61 square kilometers, its water formed beautiful lake, 20km long, 16km wide and 4 meters deep with an altitude of 2060m above sea level. An astonishingly freshwater lake has over 20 species of fish including pike, sturgeon, perch and common carp