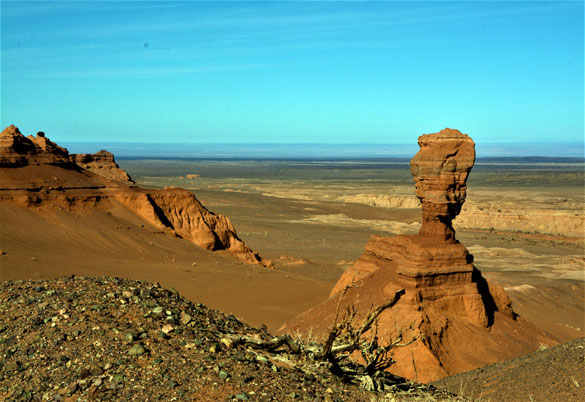 Sand rock formation of Khermen Tsav opens wider and reds. Its flatness is relieved here and there by dry streambeds. Sand canyons which formed during a thousand of years of erosion are stretched for 15-20km and 100-200m deep. Sand and more gravel are everywhere, and a scattering of dry bush. Sand rock canyons are home to the world re-known discoveries of dinosaurs’ skeleton as well as the first fossilized dinosaur eggs have been preserved at the foot of these sand cliffs. In this area, small herd of Mongolian black tailed gazelle are a common sight darting across the steppe, “flash markings”- their white behind and black tail, serving as a warning to the rest of the herd to move swiftly out of the way of potential predators. One curious feature about this animal is that the neck of the male swells during the winter mating season giving the appearance of a “goiter”. Their loud, barking call can be heard far across the steppe.