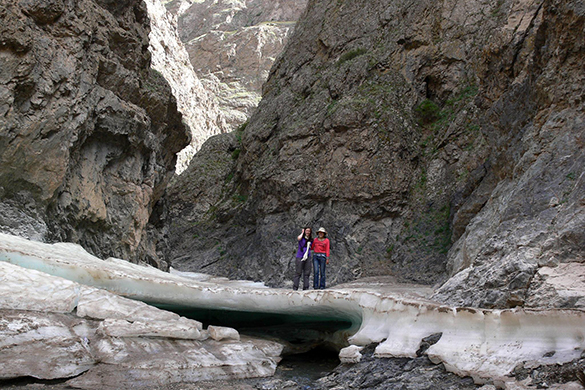 Gobi Gurvan Saihan National Park protects a rich natural, cultural and scientific heritage. Its landscapes, belonging to the desert steppe and desert zone, are of great diversity and host a variety of ecosystems including oasis, salt marshes, mountain steppe and alpine meadow. In the park’s east region, the rugged mountain ranges of “Three beauties” (2825m) rise steeply from the steppe pastures. In the Eastern Beauty Mountains, Yollin Am and Muhar Shivert are unusual features for nature lovers; in the deep and narrow gorge the creek usually remains frozen year-round as its ice builds up to several meter thickness throughout the winter. Above, Lammergeiers and eagles are a frequent sight in the sky. National Park is home to rare wildlife species including secretive snow-leopard that is globally endangered species threatened by habitat loss and poaching. Other rare, and specially protected, large mammals in the park include wild-sheep, lynx and wild cat.